What's on your mind?

I was just wondering what was everybody's thoughts on the finale, i haven't bothered to look much within the fandom but im certainly not a fan of it! id love to know what other people think of it though!

Together, TOGETHER. DNCKJAVBAKFVBikvGJH (also heres some art i did b4 listening to the episode to commemorate the finale) 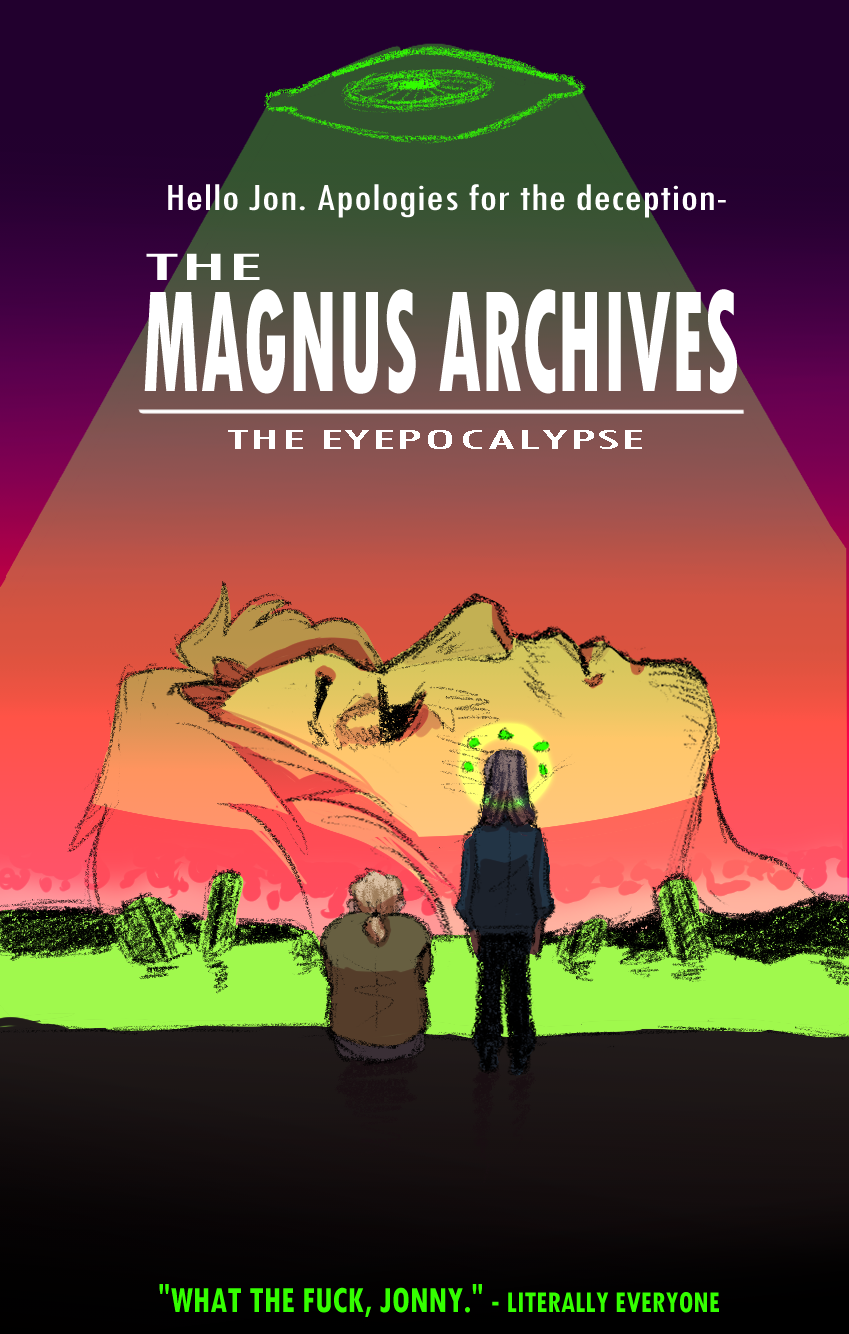 OK, so I was wondering, would there be any such thing as an irrational fear in TMA universe? If you're afraid of something, it most likely falls under the domain of at least one of the entities, and this entity will manifest horror to keep you afraid. This means that there is actually something to be afraid of, so it's no longer irrational. Maybe all irrational fears are all rational fears of things the entities have done. For example, I'm sure people would say being afraid of mannequins is irrational, since they're inanimate objects, but now it's totally rational for Jon to fear mannequins wholeheartedly.

I don't know, I'm talking in circles at this point. I'd just be interested to hear what you think.

I've seen people talking about a dog avatar, but maybe I skipped that on? What's the dogs deal?

Does anyone know when the very first compulsion took place, that we know of? I'm not talking about the first time it was mentioned to be compulsion, but there had to be a time where John compelled someone to tell the truth without knowing before MAG 89, right? Looking specifically for the first sign of static when he asked a question.

Hi, I've been trying to find/make for a while now some sort of document to organise all of the TMA episodes into a way that is easy to see.

Ideally, there would be a summary for each episode connected to 'tags' (so like, date, characters in it, related entities etc) that could be used to filter. For example, you could filter it to only see the episodes Agnes Montague is in or put them in chronological order.

Does anybody have any ideas on whether this is possible and if there's any software that could do it? Or even if somebody's categorised the episodes similarly before. I'm trying to get to know everything as much as I can before it ends so I can make theories haha

Any help would be much appreciated :)

(edited by Es Mentiras)
The Eye

Not only starvation but also no water? I would assume at first that it would probably fit into the extinction but thinking about it, starvation has been happening since the beginning of time, and extinction is specifically the fear of change. Next I would assume that it would be tied to corruption since starvation must me a common affect of food going rotten, or being unable to eat because of disease. I'd like to know someone else's point of view about this though!

In the sense of someone who has previously been abusive or manipulative towards others, and genuinely actively wants to be better to the point they can no longer trust themselves. As in, the fear of being abusive, manipulative, as opposed to being manipulated. The fear that you're so toxic, you can't trust yourself anymore. Self-doubt, the fear on oneself, kinda thing.

I've been able to make a case in my mind for quite a few.

The Web definitely has ties to distrust and manipulation, but it seems to lean more towards the victim than the (past) abuser, though I suppose it could have ties on the abuser as well, though I don't feel as strongly on this.

The Stranger is literally the fear of not knowing people, so in theory it could be turned back on oneself? Especially with the latest episode (182), wherein the last person literally seems to state that they cannot trust that she isn't better, that she isn't the best she can be- self doubt sort of thing.

The Spiral is also heavily rooted in distrust and fear of a situation, "It is not what it is," could apply to oneself. "Your mind is lying to you" could be that you're better, that you're not what you once were.

There's smaller arguments, like the Corruption takes root in toxic relationships, the Desolation deals with destroying potential (though not so much the fear of destorying it), and the Lonely could take root in the actions taken by the person with such fear; if they are afraid of what they can do, why risk interacting with others?

I don't know, and I was curious what others thought about it.

I'm new to the fandom and sooooo regretting not listening earlier. (I've b

I'm at 157 (Rotten Core) and some lines are a punch in the gut. Yeah the body horror is way worse than Covid-19 (comparatively) but still.

"I’ve spoken before about how keenly I’ve watched news of possible pandemics, which is where I suspect the Extinction may pull away from the Corruption during its emergence. This alongside the possibility of the disease being man-made – though I am certain no human had anything to do with it – well, it was more than enough to draw me in. "

"So it seemed it was not the Extinction as I had anticipated, but simply a new and awful strain of Corruption."

I've been wondering what exactly does MAG mean? I'm sorry if that's a stupid question.

Hi everyone! I was just wondering of anyone knew how exactly statements were numbered. I wrote a little statement as a short story and I felt like the appropriate way to name it was to give it an official number. I can't remember the episode in season one where Jon and Tim talked about Gertrude's numbering system, but I know it's a bit complicated. Is there anyone who could explain it to me, or point me to the right episode?

I was attempting to explain the concept of the entities to a friend who has no idea about anything to do with TMA, and ended up making a rough chart to explain simply what each entails and how I personally think they connect to each other. It's super hard given that a few of these fears overlap with one but perhaps not another, but I think I made it as accurate as I could whilst keeping it as simple as physically possible. I'd love to know other peoples opinions on what changes they would make, or what fears they would move! 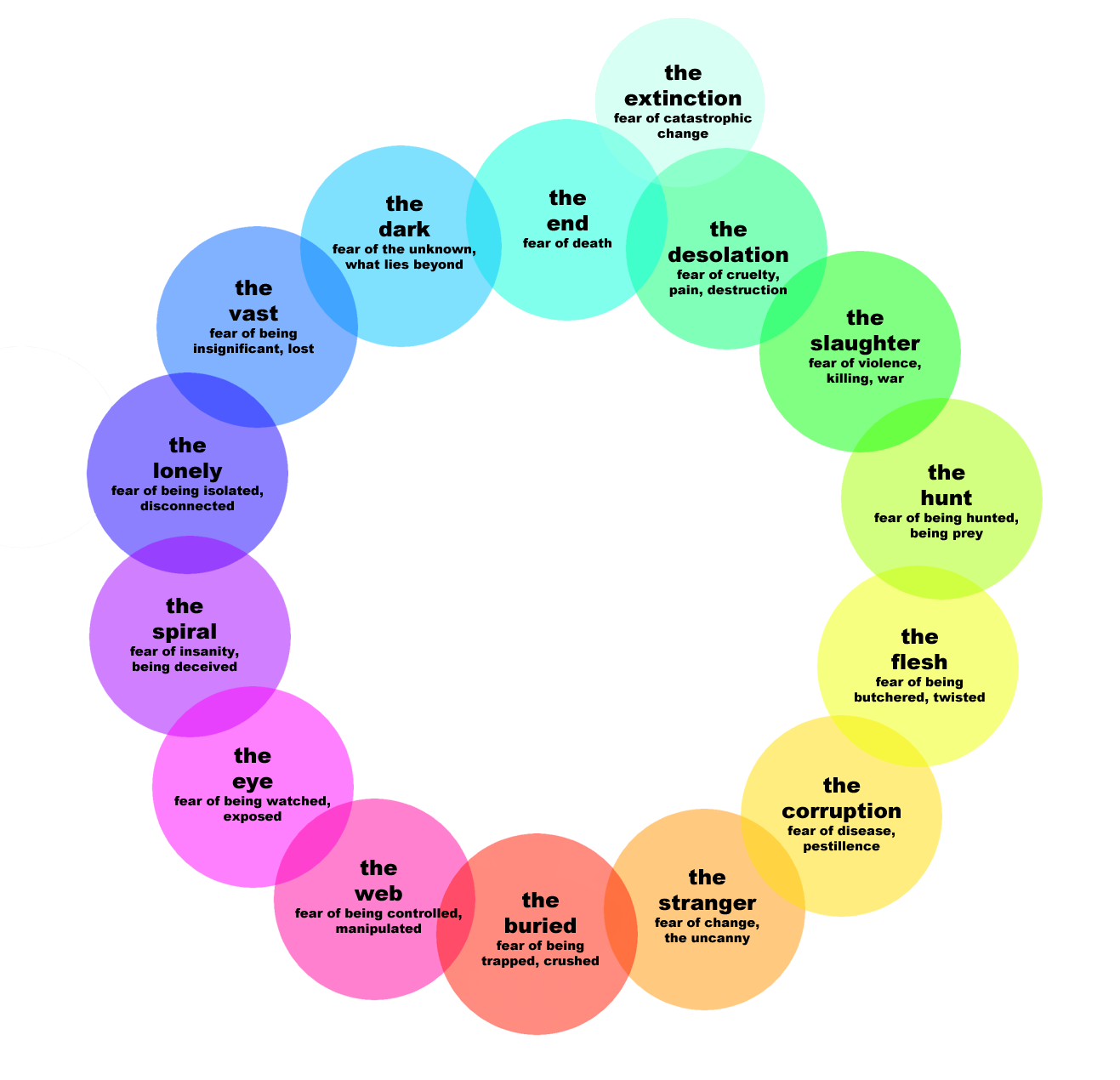 hi! i realised listening to ep 32 (hive) that the oliver jane mentions is very probably 'antonio blake' from ep 11 (dreamer).

- the oliver mentioned by jane in ep 32 seemed to always look at her with sadness, and then, once, with fear.

- 'antonio' sees people who are about to die in his dreamscape, and would probably look at jane sadly if he recognised her from the dream. the fear could either be because of whatever jane did during her breakdown at work, or it could be because she was still walking around even after she'd apparently 'died' in the dream

i'm sure people have made this connection before, but i couldn't find it anywhere on the wikia and was wondering if it should be added to the page for either episode 11 (as it provides possible insight into 'antonio''s identity) or episode 32, and if so, whether that should be in a subsection on the episode page for 'theories' or 'connections to other episodes' or something. or is there a special page for unconfirmed connections that i'm unaware of that these things could be added to?

Did Micheal kill the builder's schizophrenic father?
Yes Micheal killed him
No it was a different aspect of the spiral
No it's something other than the man with all the bones in his hands

This is the place to talk about your favorite topic, to share news, theories, ideas, and to connect with others.

To learn more about what you can do here, check out community.wikia.com/wiki/Help:Discussions

If you're an admin on this community, read more about how you can customize your Discussions and set up guidelines for contributors: community.wikia.com/wiki/Help:Admin_and_Moderator_Tools_in_Discussions